Due to the Covid surge, The Carle is extending its closure to the public through Wednesday, February 2. All online shop orders will be fulfilled and curbside pickup will be available. You can reserve admission tickets now to secure a spot starting Thursday, February 3. Walk-ups not guaranteed. Masks required for ages 5 and up.

Every Art Studio intern at The Carle designs a special one-day art activity for Museum guests with the guidance and assistance of the Art Studio Educators. Laurie, one of our summer interns, hosted a special Studio activity exploring symmetry and color. Here is her report on the day. 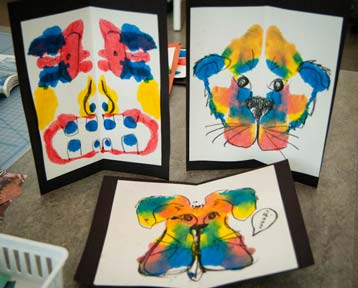 This month’s Special Sunday was my opportunity to design a project for all ages. I realized how tricky it was to come up with an idea that not only allowed as much freedom as possible, but also encouraged our guests to be imaginative. After discussing a few ideas, we agreed upon an acitivity and called it Inkblot Creatures. It is inspired by the famous Rorschach Tests, which are symmetrical inkblots used to study peoples personality characteristics when they report the images they see in the forms. 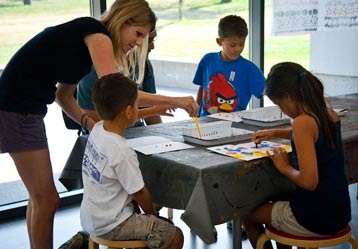 The paint we used for this project was liquid watercolors, which worked well for a few reasons: they dry relatively quickly (when used moderately), they can be drawn on with watercolor crayons, and the colors bleed together quite beautifully. 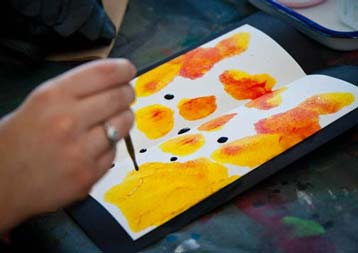 To create an inkblot creature, guests were invited to use a pipette dropper to put a few drops of each color on their paper, fold it in half along a center crease, then press and rub all around the folded paper. When they opened the paper back up, the paint had squished and spread into an interesting and colorful form! 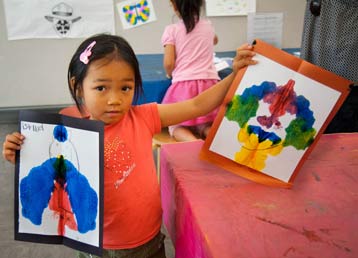 After thinking for a few moments and turning their paper to get different views, guests used their imagination to draw in the rest of the creature with a black watercolor crayon. Some guests were inspired to see things besides creatures, like tree bark, a sunset, or a princess in their work too. I prepared watercolor paper by pre-folding it so there would be a crease down the middle. I also mounted it on larger black paper, which gave it a frame but also allowed room for the paint to bleed onto if it went off the sides of the white. 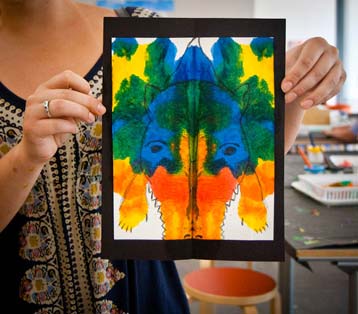 At first I put the paints in a shallow dish, but I noticed that sometimes a guest was tempted to use ALL of it at once, so I tried using a smaller cap to encourage using an amount of paint that made sense for the size of the paper. The project works best when starting with a just little paint, then adding more as you go. I only put out red, yellow, and blue so beautiful secondary colors would appear when the paint bled together. 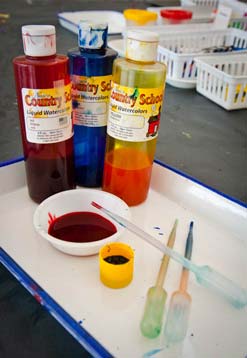 This project is not only a lesson on symmetry, it is also surprising and inspires the imagination. We hope you try it for yourself!