The Art of Surprise

During a past Everyday Art Project, we noticed that children and adults alike love the surprising reaction between watercolor paint and crayons, where the crayon actively resists watercolor. We wanted to continue to explore the art of surprise and the result was the conclusion to our Let’s Make Art Together workshops.

In thinking about surprises, I was reminded of Jules Feiffer’s book Bark, George. I was drawn to the book’s bold, black outlines, and colorful pages that expressed the surprising tale of a dog who had swallowed many animals whole, including possibly a human! Inspired by this books many surprises, guests were first invited to explore mystery boxes.

Before the workshop, eight cardboard boxes were cut so that each had a square opening, large enough for an adult to put their hand through it. Two pieces of fabric were then attached at the opening to prevent folks from peeking inside the boxes. 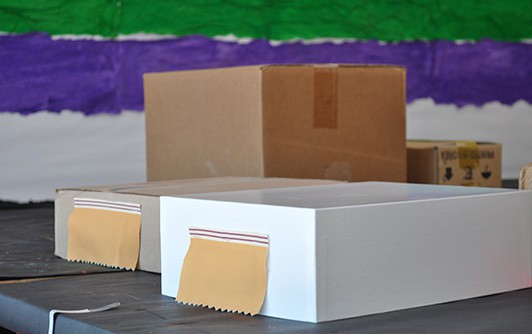 Each box was placed on the table, and we then chose one mystery object to place inside each one. The objects (including yogurt containers, tennis balls, mattress foam, and a giant starfish, just to name a few) varied in texture, size, shape, and material. When guests arrived, they were invited to rotate around the table, reaching in and feeling the objects inside. 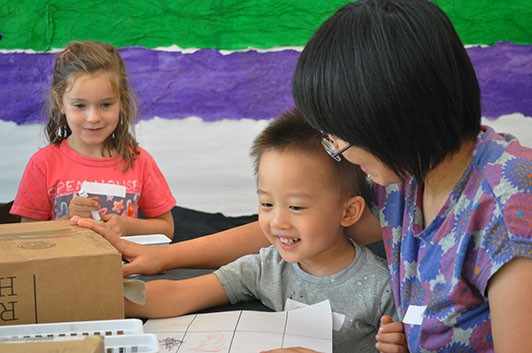 Guests were given a piece of drawing paper to rotate around with, drawing on it with colored pencils to express what they were feeling inside each box. We focused on doing quick, one-minute sketches so that each drawing captured the textures they felt using their sense of touch, rather than a detailed drawing of what the object might look like. 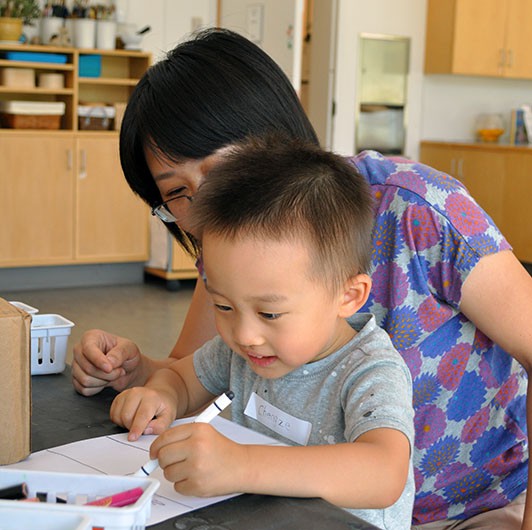 Children described the textures they felt, saying for example that an object was “smooth” or “bumpy but squishy”. Based upon what they felt inside the boxes, the children chose to draw with colors that corresponded with the textures. Some people chose to draw rough surfaces with a red colored pencil and used blue to draw smooth surfaces. 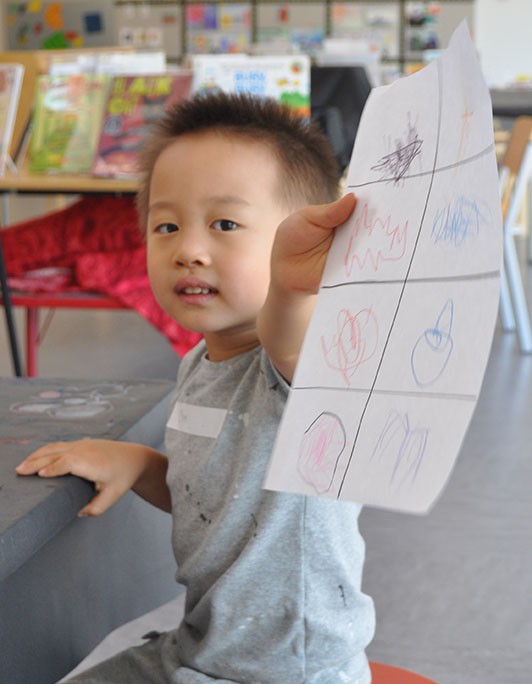 After everyone had gotten the chance to rotate around the table, we pulled back the boxes and revealed all the mystery objects at once. Guests were surprised to see what the objects looked like and enjoyed feeling them again even after seeing what they were. 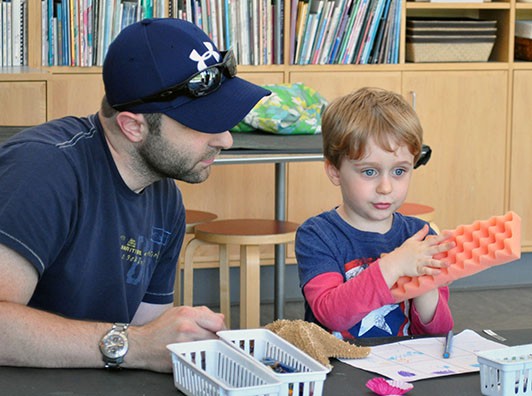 After this warm-up of drawing and thinking about surprises, we read Bark, George together. Children were interested in re-creating the expressive facial expressions, laughing whenever an animal was pulled out of George, and wondering what the ending meant. It got us all thinking about eating, what is the silliest thing we have eaten, and what happens to the thing we have eaten once we swallow it. 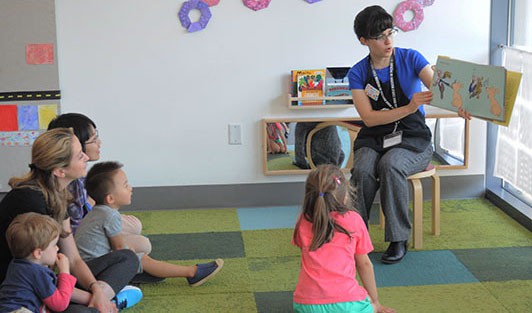 We transitioned over to large pieces of drawing paper that we had taped to the ground where the children’s outlines were traced onto the paper using crayons. 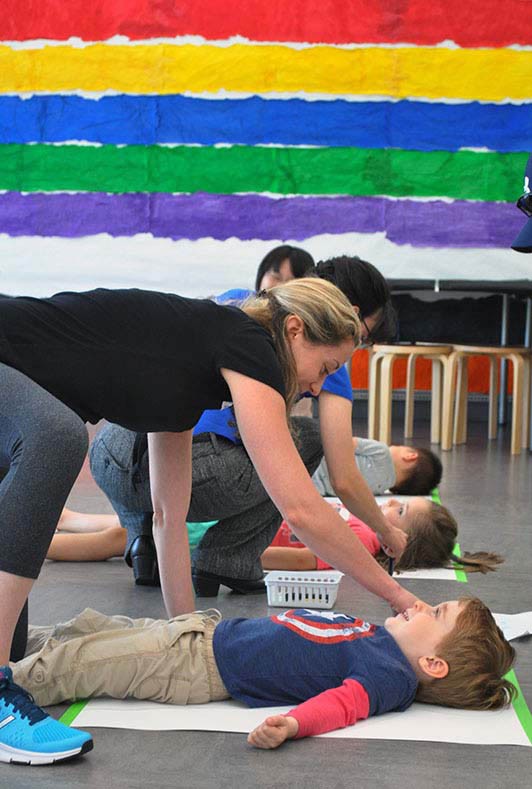 They then got the chance to draw within their body, showing the types of food that they ate and how it traveled through their digestive system. Some children were interested in drawing foods that they ate that morning, others were describing their favorite foods. One boy decided to cover himself in a flurry of crayon marks, explaining that he was covering himself in a blanket. 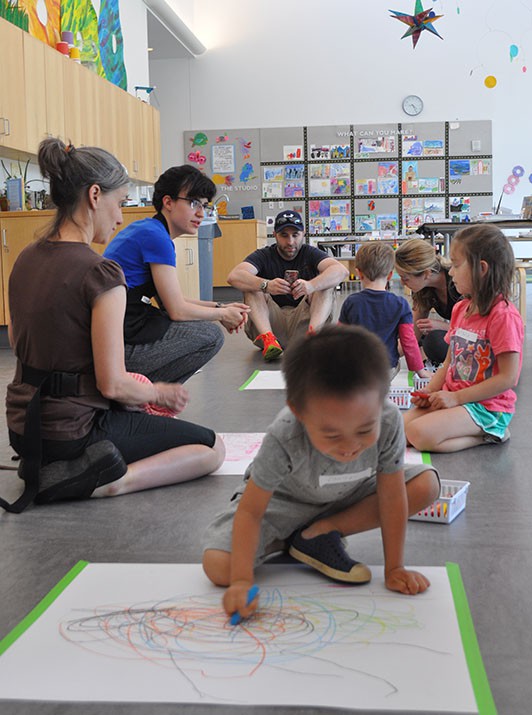 To add to this experience, we then introduced white paper cut into geometric shapes as well as glue sticks for folks to create their own surprise flaps to reveal what was inside their bodies. Some drew food around their body and covered them using the flaps while others chose to create flaps in the middle of their bodies. 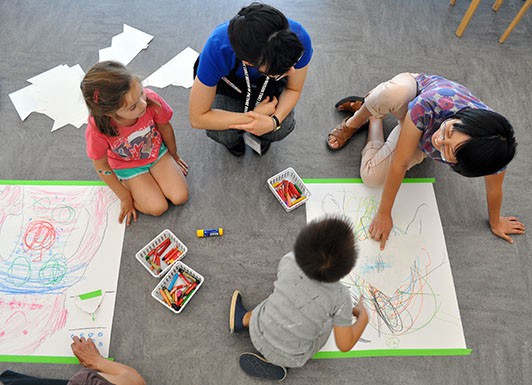 It truly was a team effort to help draw and create flaps with everyone participating. 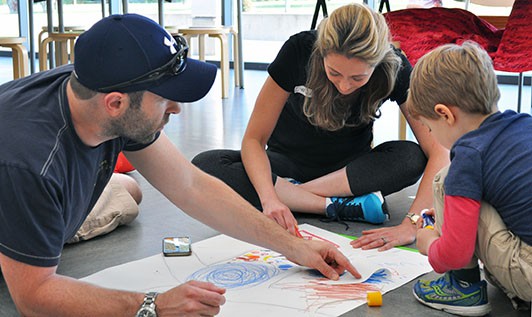 At the end of the day, everyone got to walk away with their body drawing and ideas on how to create surprises using drawing tools and paper. We hope this post serves as inspiration to explore the art of surprise at your home or place of work! 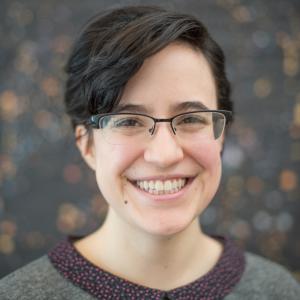