Recently, Spring Art Studio intern Becca Angstadt designed a Special Sunday program for museum guests. She planned the event, prepared materials, and facilitated art making in the Art Studio. The following is her description of the project:

For my intern project, I chose to create a paper hat making activity. This project was inspired by The Cardboard Kingdom graphic novel, which I was introduced to here at the museum during the Out of the Box: The Graphic Novel Comes of Age exhibition. Inspired by the cardboard costumes in the story, I wanted to design a wearable art project that guests could take with them around the museum.

My initial plan for this project involved using colorful collage paper and tape to create sturdy, wearable hats that could be decorated to become any kind of costume piece imaginable. I sketched out some prototypes, and after discussing my plan for the project, I began cutting the materials. Using the giant paper cutter was my favorite part of the preparation process—as someone who is only five feet tall, using a paper cutter half as big as I am makes me feel powerful and gets things done quickly.

The day of the project was a quiet one, but the guests who visited seemed to enjoy the activity. I saw guests wearing their hats around the museum, including a group dressed up in paper-hat style, reading in the library, and a group outside enjoying the spring weather in their colorful hats.

The final hat making supply lineup included colorful construction paper and collage paper, multicolored rolls of tape, patterned scissors to add texture to the hats, and markers, to add more color to the project. The tape ended up being an unexpectedly popular material, so much so that one guest chose to forgo the paper entirely and create a 3-D design from only the tape to take home as his wearable art piece. Another guest chose to decorate their hat with the colorful tape rather than the markers or collage paper, and ended up with an extremely sturdy tape-hat that was just as bright and colorful as any of the other paper creations.

Guests were encouraged to experiment with decorating the basic hat form, and although my introduction to the project was a little bit shaky at first, I eventually found my stride in introducing the project, and found a balance between what was self-explanatory and where we could encourage creative interpretation without losing the basic hat shape. 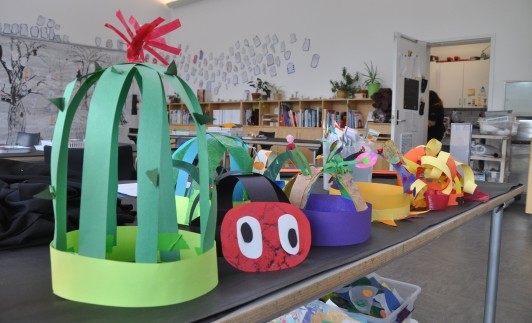 The hats took a wide variety of forms, including everything from animal hats, to plant hats, to a few royal crowns that I saw younger guests crowning their adults with. One group chose to make a matching pair of flower hats, creating a wearable paper garden that they could travel around the museum. 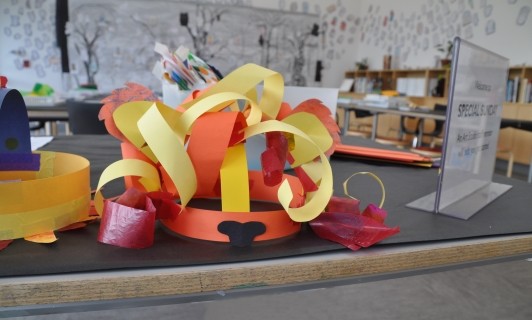 One of the best parts of the day was seeing the creative ways that guests were using the materials. From flower crowns to entirely-tape constructions, it was great to see all of the different creations that the project inspired.