Get admission tickets now to reserve a spot. Walk-ups not guaranteed. Masks required for ages 5 and up. NOTE: Beginning June 1, The Carle will be open on Wednesdays and advance tickets will no longer be needed.

The museum will close at 4pm on May 29th for a private event.

Printing with Children: Roll with It!

Recently here in the Art Studio, Hannah Fiske, one of our summer interns, designed and hosted a special Studio activity. Here is her report of the day. 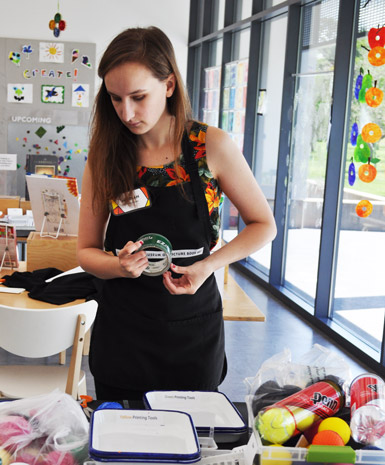 The Studio has done so many amazing projects in the past that when I started thinking about my Special Sunday I was a little intimidated, but as soon as I began to generate ideas I became engrossed in the possibilities and excitement overtook nerves. I ended up settling on the idea of using round objects as printing tools. I thought it would be interesting and fun to take objects such as wiffle balls or tennis balls, normally used for sports, and transform them into tools to create art.

To begin, I gathered all the colorful round objects I could find, wiffle balls, balls of yarn, tennis balls, squishy foam balls, mini footballs and more, and experimented with how to use them for my project. One of my favorite printing tools ended up being the wiffle balls. Through a discussion with Diana I came up with the idea of adding sticky backed foam shapes to them to create interesting patterns on their surfaces. I brushed a layer of Mod Podge over the foamy pieces to prevent them from peeling off too quickly. If you do this activity at your home or school, for cleanup I  recommend quickly rinsing any excess paint off the surfaces and allowing them to dry thoroughly before storing them. 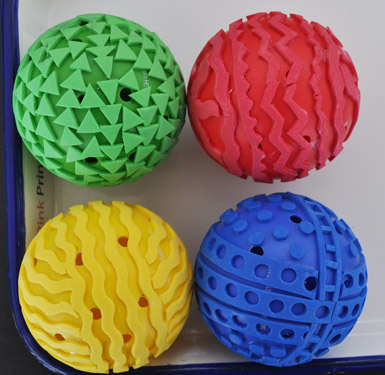 We were lucky enough to have a wonderfully sunny day on the day of my project, and I setup on the Art Studio’s outdoor patio. Along the patio’s ledge I made paint stations by color: pink, yellow, green and blue; people could work from either end and easily move from color to color. 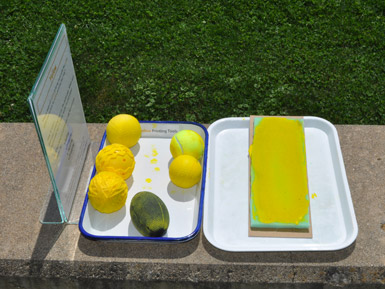 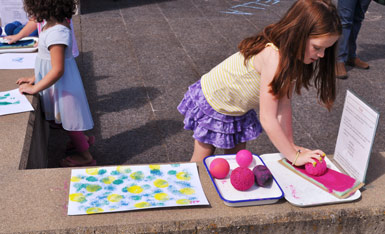 To help kids keep the yellow printing tools with the yellow paint station, and so on, I coordinated the colors of the printing tools to the paint colors, making it easy for kids to organize the supplies themselves. For inking the tools I used the the homemade stamp pads, like the ones the Studio has made in the past. The stamp pads allowed for the objects to get covered in paint without becoming too wet or clogged. The large size of the custom stamp pad also allowed guests to roll the printing tools around, getting paint on many sides. 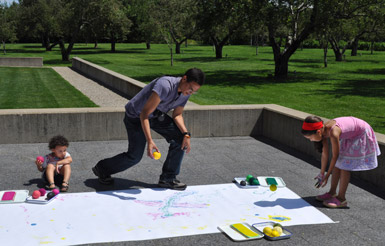 While I wanted everyone to be able to create their own image, I also thought it would be fun to have a large group project, especially because the larger paper would allow the kind of activity these sport objects were originally meant for. A brother and sister played catch, rolling and bouncing the tools along the larger paper to create marks. Others created giant butterflies and flowers. 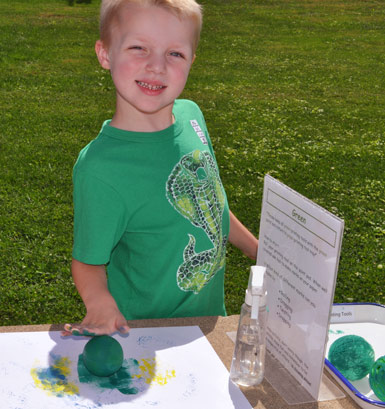 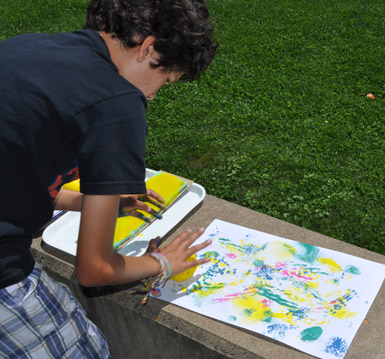 By the end of the day I was amazed by how many creative and diverse approaches people had come up with, dropping, rolling, twisting, stamping, dragging and much more! 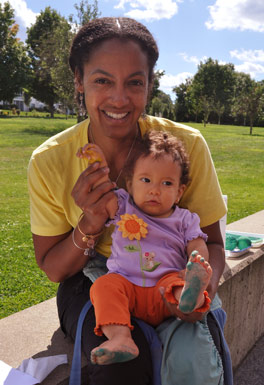 Watching guests’ creativity bloom in the Studio has been one of the most exciting things to experience during my time at the Carle! 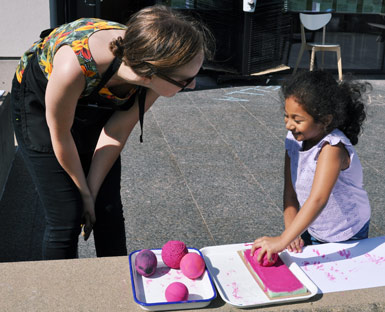 I had a wonderful time putting together and leading my special Sunday. Thanks to everyone who came out and created with us!