This week, we explored art inspired by gardens. Gardens can take many forms: potted plants on a window sill, a carefully planted vegetable patch, or landscaped spaces in parks. The team took some time observing, researching, and imagining gardens, and used a variety of materials to create their own. 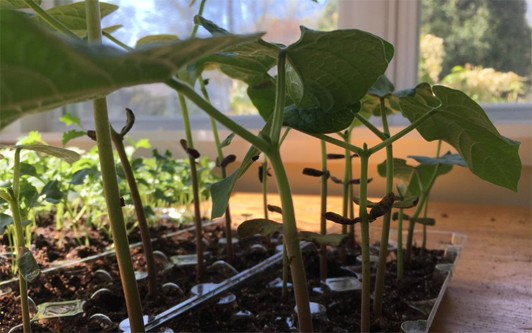 Sara planted bean seeds in an egg carton and has been enjoying watching them grow over the course of several weeks. She thought it was incredible that each tiny seed soon produced a strong stalk and large leaves. Inspired by the beans’ growth, Sara wanted to create an artwork that showed this process in motion. 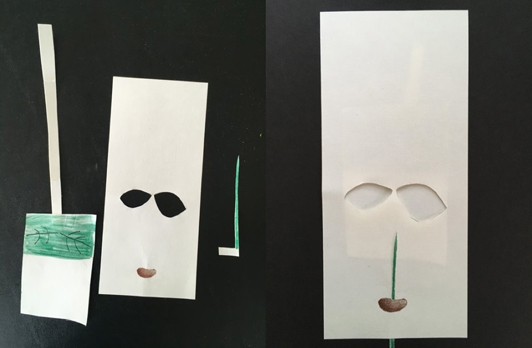 To create the illusion of growth, Sara decided to make separate pieces to the artwork that could be moved and layered to reveal various stages of the bean’s lifecycle. She started by finding a tall piece of computer paper, and drawing a small bean at the bottom. For the stalk, Sara cut out a thin strip of paper and used a pencil to color it green. She cut an opening at the top of the bean to allow the paper stalk to slide through and look like it is growing out of the seed. To make cuts in the middle of the paper, we always recommend folding the paper and cutting along the fold. This means you do not need a craft knife, and is safer than trying to poke the scissors through the paper. 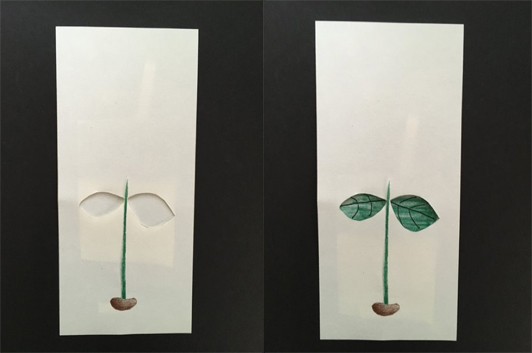 Sara cut out two leaf-shaped pieces several inches above the bean. On a separate smaller piece of paper, she used her green pencil to color in half the sheet. This separate piece then slid behind the artwork to reveal green leaves. She also added black vein lines on the leaves for more detail. 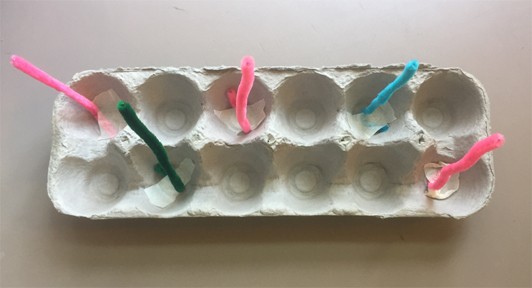 Megan found an egg carton in her recycling, and inspired by Sara’s indoor garden, she decided to create a sculpture of imaginary plants. She started by taping the ends of several short pipe cleaners into the egg carton to look like plants sprouting.

Megan decided to try a different way of making plants, and added more stalks by taping down pieces of cardstock with tabs at the bottom. 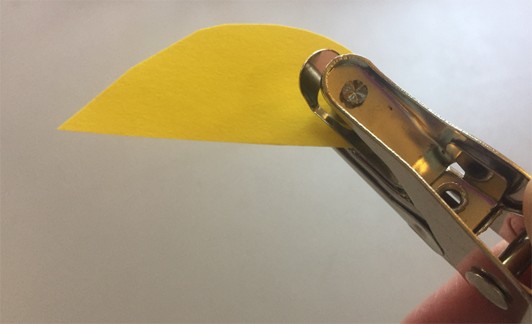 Then, she cut out leaf shapes from different colored papers and drew on several of them to add texture. Using the hole punch, she made holes to thread the pipe cleaners through. 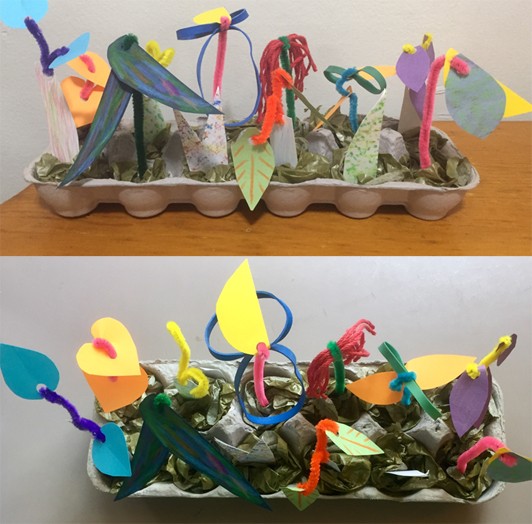 She also used some yarn and rubber bands to create leaves, and folded the pipe cleaners around them to hold in place. Finally, Megan stuffed crumpled tissue paper around the bottom of her plants to look like dirt.

Meg was inspired by a rock garden outside. Up-close she noticed the textures of the rocks, some were bumpy and others were smooth. The rocks were many colors and had different patterns on their surfaces. 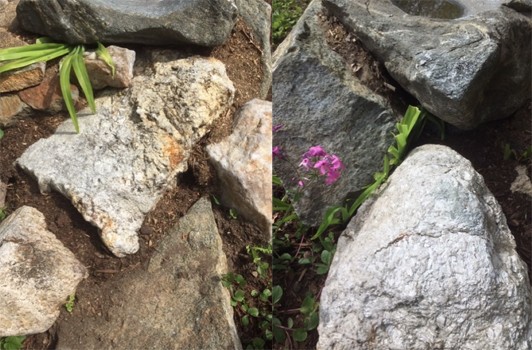 Looking at groups of rocks from slightly further away, Meg was interested in the shapes between the rocks, and how plants were growing in these small spaces. She could even see a hole a creature had dug. Meg often sees a chipmunk on the rocks, maybe that is their home!

After closely observing outside, Meg decided to go inside and make her own rock garden out of collage papers.  She went on a scavenger hunt through old magazines to find papers with different colors, textures and patterns that reminded her of the rocks she saw.  She found papers patterned with drawn lines, truck tires, and even animal fur. She cut some rock shapes and tore others, enjoying the variety of shapes they made. Meg played with arranging her rocks on a paper before gluing down, adding paper plants between them.

Sara was inspired by the small flowers growing in her backyard. She thought it would be interesting to try printmaking with them. Sara collected a few flowers, spinner seeds, and green leaves. She then placed the natural materials face down onto a piece of computer paper, placed another piece of paper on top and gently hammered them. When she pulled back the paper and brushed off the squished materials, she discovered that the leaves, flowers, and seeds left different impressions. 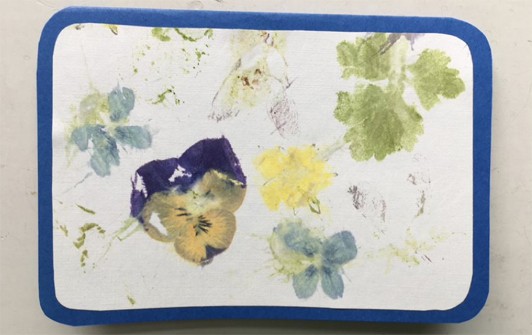 Sara then cut the printed paper and glued it to a card to send to a friend. The print reminded her of the wildflower patch that she had found the materials in. 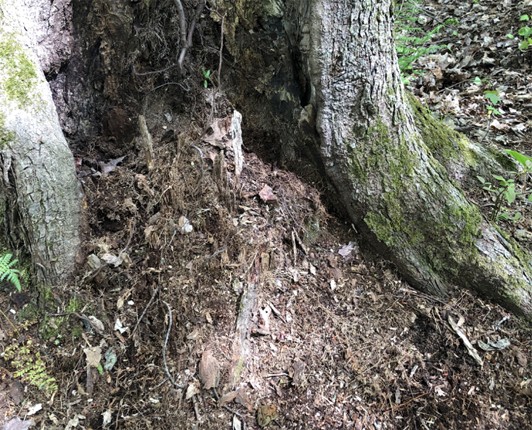 Hannah always enjoyed building fairy houses when she was a kid while her mother was working in her garden. This week she thought about what sorts of gardens a fairy would enjoy, and where to start her garden. 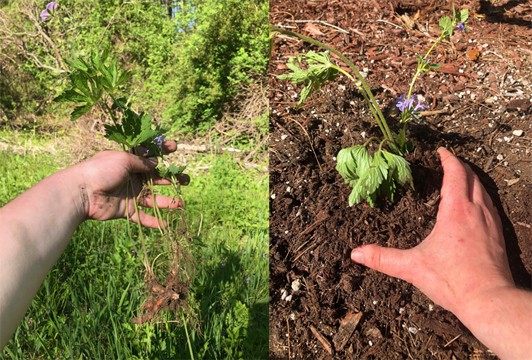 With the help of her sister Tess, she began by gathering wildflowers and stray plants from her mother’s garden. With her fingers and a small shovel, she cleared away leaves and gently loosened the dirt around the plant, making sure not to tear the roots. When Hannah replanted her flowers, she used her shovel to loosen and turn-over the soil. With her fingers, she made a hole, very gently placed the plant into the hole, and covered the roots with dirt. 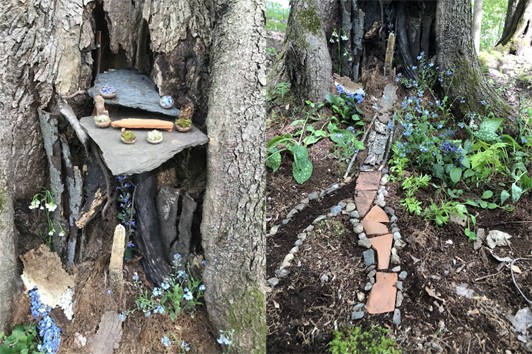 While Hannah continued to add plants, Tess found some broken pieces of an old pot and thought they would make a lovely garden path. Once the plantings and garden path were complete, they started to add more details. Hannah placed moss in an acorn cap, thinking it would make a comfy seat. They placed small flowers in another acorn cap to make a tiny potted plant!

If you are looking for more ideas, here are some videos about gardens and nature that have inspired us. Author/illustrator Christian Robinson has been creating a series of videos called “Making Space.” This video is all about perseverance and gardening. Author/illustrator Jarret J. Krosoczka been sharing drawing videos through his series “Draw Every Day with JJK.” Here is a video from his nature-themed week.