Recently, Summer Art Studio intern Morgan Tabb photographed and identified a small visitor to the Art Studio. The following is her description of the encounter and process of identification:

On many a hot summer morning we receive small bug visitors who like to sun themselves on the outside of the Art Studio’s windows and door. This morning there arrived a particularly beautiful moth with big eyes and a friendly personality. 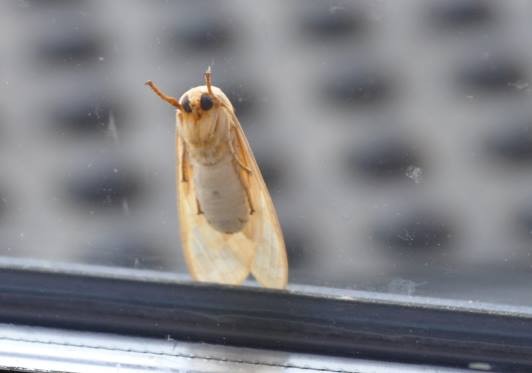 I decided to first take a few photos from inside the studio, but as I moved outside I was able to capture the delicate details on its wings and legs. The translucent wings showed an orange striped pattern that had a slight wave to it. The back of the head had more orange, but also a pop of blue. The legs were also striped, starting with a lighter orange near the thorax and descending to a darker orange towards the ends of the legs. My favorite part of this image, which I only noticed after I had taken it, was the multiple reflections of the moth in the window. Additionally, the amount of detail the camera was able to capture was astounding, and very helpful in the process of identification. 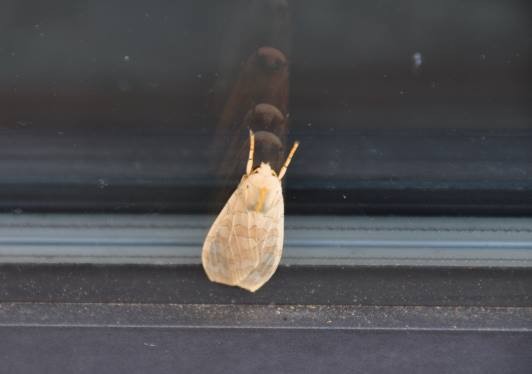 My first step in identifying our friend was to take to google and plug in some keywords and phrases, such as “New England moth,” “orange,” “blue,” “striped.” I found this to be a bit too broad, as I was receiving pictures of a large variety of different moths. I decided to narrow it a bit, and searched for Massachusetts moth identification. I quickly found a website listing butterflies and moths of Massachusetts, and discovered our visitor was either a Banded Tussock Moth (Halysidota tessellaris) or Sycamore Tussock Moth (Halysidota harrisii)! The reason for this uncertainty comes from the fact that the Banded Tussock Moth looks identical to the Sycamore Tussock Moth, and the only way to really tell them apart is in their caterpillar phase. Additionally, both moths are found in Massachusetts, making it even harder to narrow down. So, we were not able to confirm which one this moth happened to be.

I read more about Banded Tussock Moths, and learned that they drink liquid from decaying plants; they then retain the chemicals from these flowers in their systems, which makes them unsavory to predators. While the Banded Tussock is not good to eat, the Sycamore Tussock is not good to touch. They don’t sting, but leave irritation when they come into contact with skin. Both moths are not only native to Massachusetts, but are found in Canada, down through Texas, and throughout the east towards New England. 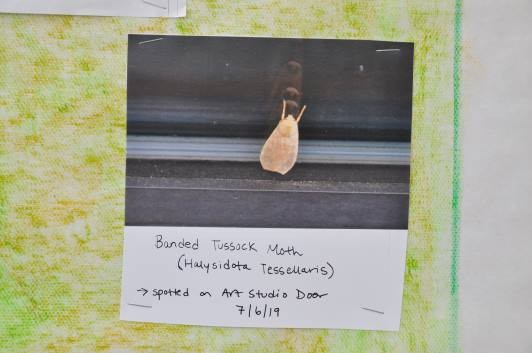 After identifying our friend (and adding an addendum to the board stating its other possible species name: Sycamore Tussock Moth (Halysidota tessellaris)), I was able to add a labeled picture of it to the Bobbie’s Meadow documentation board in the Art Studio. Our board is home to pictures of identified species of plants, animals, and insects in our very own meadow, as well as observations and drawings of the meadow made by visitors. Be sure to stop by on your next visit and add your own meadow findings to the board! 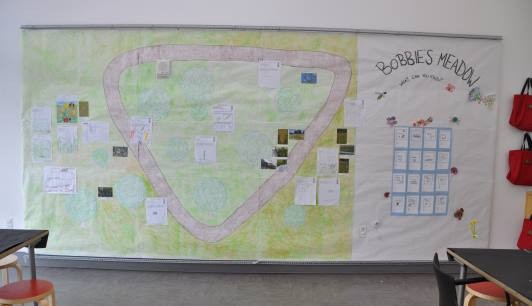